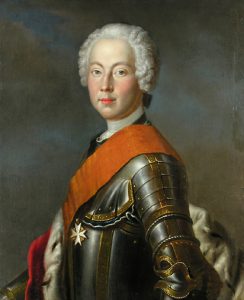 Margrave Friedrich, son of the later Margrave Georg Friedrich Karl and his wife Dorothea von Schleswig-Holstein-Sonderburg-Beck, was born on 10th May 1711 in Weferlingen. He was given a comprehensive education and upbringing and studied for eight years at the calvinistic University of Ghent, the evangelistic metropolis in those days. Only two generations previously, great pains had been taken at the Lutheran Bayreuth court to ensure that the hereditary princes did not fall under any Reformed influence. Upon completion of his studies he went on an educational trip to Paris and Versailles which awakened an interest in parks and water features. He loved art and perfected his flute-playing technique there. Both of these skills came into their own later at the Bayreuth court, but were mostly overlooked or forgotten as a result of the ‘hype’ surrounding Margravine Wilhelmine, and the university which he founded was soon moved to Erlangen.

When, upon the death of his father, he had to take over as ruler, he was totally unprepared for the role. Georg Friedrich Karl had kept him well away from anything to do with the business of reigning for fear that Wilhelmine would have too much influence. It was only with the aid of his secretary and later First Minister Philipp Ellrodt that he was able to put the administration into order, deal with and prevent corruption and and improve the revenue. Like his wife he had suffered from the rigid and narrow piousness of his father, and so as soon as he took office he dismissed Silchmüller, the pietistic court preacher, and in his place installed the moderate Lutheran court preacher Schmidt. Most of the margrave churches were built in Friedrich’s time. His initial is the one that is particularly large, splendid and prominent on the walls, even if his financial contribution was not that great and confined itself mostly to free deliveries of stone and  building timber.

‘He is cheerful and pleasant to talk to, although he is difficult to understand as he tends to mumble. He is very swift to grasp things and has a piercing intellect. His goodheartedmess endears him to all who get to know him. He is magnanimous and ready to help , sympathetic, polite, obliging, consistently good-humoured; in short , he posseses every virtue and there is no vice in him. The only weakness I have found in him is that he is a trifle thoughtless.’