The altar is the place in the church where God is most present, in a very special way. This is where prayers are said, forgiveness of sins is granted, Holy Communion is celebrated  and blessing is given. 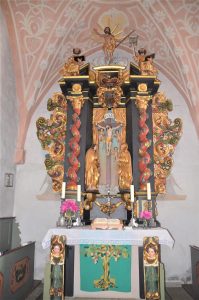 Most old altars in Lutheran churches consist of  a solid rectangular altar table (‘Mensa’) with an altarpiece on top. In early Christan times the altar stood in the centre of a space and the priest celebrated facing the congregation. (‘versus populum’). Later the altar was moved nearer to the wall, and the prayers were said facing the same way as the faithful. An unusual variant of the distribution of communion is seen in the so-called ‘strolling’ communion, during which the communicants go round  behind the altar. They kneel at the communion rail on either side of the altar steps to receive bread and wine. Above the communion table, in the lower section of the altarpiece, or ‘predella’, there is usuallly a representation of the Last Supper of Jesus with His disciples. Or the faithful are asked not to take communion ‘unworthily’, i.e. without first having confessed their sins. Angel heads represent the cherubim and seraphim , who sing ‘Holy,holy,holy’ (‘sanctus’).

In the Gothic period the panels or ‘retables’ dominated the altarpieces  with paintings or sculptures – ie a ‘retable altar’, often divided into three , (‘triptych’) with wings that were closed during Lent.  During the Renaissance and Baroque periods elements of classical architecture were added: pillars with splendid Corinthian columns, beams and arches. The altar developed into a ‘temple’, a shrine accessible to everyone, in the centre of which there is often a representation of the Crucifixion. In margrave churches it is mostly the Risen Christ or the Holy Trinity which is represented right at the top of the altarpiece.

Preaching and communion are united in the pulpit altar.