Baroque is more than just a style in the history of art. Baroque became a term for a whole epoch with its spirit and the forms which it took, be that architecture, painting, music or  literature right through to fashion and gardening. It began at the end of the 16C in Italy, and in the mid-18C classicism took its place. It can be divided into different phases: Early baroque (up until c.1650), high baroque (c.1650-1700), late baroque (c 1700-1730) and rococo (c.1730-1760/70), though rococo is regarded as a separate style epoch in its own right.The term ‘baroque’ comes from Portuguese and actually means ‘crooked’ or ‘uneven’.

During the Counter-Reformation the Roman Catholic church wanted not only to hold on to its faithful but to win them back again, by appealing above all to their human emotions, and by representing its beliefs in such a way that even simple folk could understand it. In the age of absolutism the princes wanted to demonstrate their power with sheer splendour.The great example for them was the French ‘Sun King’ Louis 14th and his Palace of Versailles. Baroque arts were intended to amaze and overwhelm. To this end, the boundaries between the various art forms such as architecture, sculpture and painting were crossed , and ‘syntheses of the arts’ were created, seen more clearly than anywhere else in baroque opera. In the realm of the church, the subject matter comes from the Christian tradition; elsewhere it is mostly from Greek mythology.Vital  features are stucco and carvings, often with overextravagant ornamentation and a specail liking for symmetry. In rococo stucco this gives way to free forms. 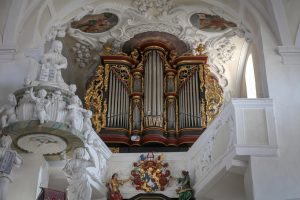 After the Thirty Years’ War  Lutheran churches were also either rebuilt in the prevailing baroque style  or were redesigned (‘Baroque’d’).  Generally more reserved in their splendour , they nevertheless contain many paintings and sculptures, with hosts of angels and ornamentation intended to delight the eye and above all  encourage meditation on the Proclamation of the Word. The artistic merit varies: from court artists – above all excellent stucco artists, masterly woodcarvers and polychromists – to simple ‘peasant baroque’. In the margravate of Brandeburg-Ansbach the tendency was to adhere to classicist baroque as was the case in France.
(On baroque in general: extensively covered in Wikipedia: https://en.wikipedia.org/wiki/Baroque )

Tip: Starting in 2020 an annual baroque festival  will be held In Bayreuth.