As far as art history is concerned, the period between 1740 and 1820 replaced  baroque and rococo. Simple forms and decoration took the place of baroque pictorial abundance. These forms were taken from antique Greek and Roman temples.

The archaeological excavations in Pompeii played a big part in the rediscovery , and the spiritual founder of classicism in Germany, Johann Joachim Winckelmann, got to the essence of it with his ‘noble simplicity, silent grandeur’. Probably the best known classicist building in Germany is the Brandenburg Gate in Berlin. In older German history of art the transition from late baroque to classicist forms is referred to from time to time as ‘pig-tail style’, named after the plait, in which the baroque flower garland is reduced to just a thin band. 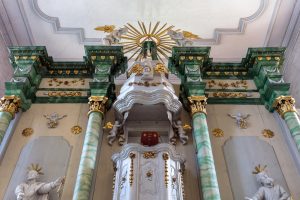 In church construction classicism arrived in the margravate of Brandenburg-Ansbach earlier than in the principality of Bayreuth. Royal Buildings Inspector Johann David Steingruber designed numerous new churches in this sober style. This was also justified theologically: external paintings and figures would distract from what was essential. True godliness takes place in the heart.

In the margravate of Brandenburg-Kulmbach/Bayreuth, the churches in Bad Berneck und Ludwigsstadt
(picture) were rebuilt /redecorated in (early) classicist style around the turn of the 19C, and later on, after fires, those in Hof – St Lawrence ,and Weissenstadt.