The Prussian Princess Friederike Sophie Wilhelmine was born in Berlin on 3rd July 1709. She was the eldest daughter of the ten surviving children of the ‘soldier king’ Friedrich Wilhelm 1 and his wife Sophie Dorothea of Hannover. Her distinct sense of self-importance as a ‘Royal Highness’ stayed with her until her death on 14th October 1758.  Even though she could not claim to be a physical beauty, the often sickly king’s daughter frequently referred to herself as ‘the most beautiful skeleton in Europe’. The extensive building activity which she undertook with her husband (Margrave Friedrich) has put its stamp on the city of Bayreuth to this day. Her intention was thereby to impress her brother, the Prussian King Friedrich , to whom she was very close by virtue of their difficult childhood and adolescence, and whom she honoured as the sun God Apollo both in the Eremitage and in her Opera house. 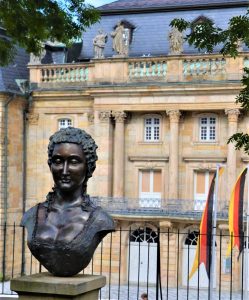 It was the marriage politics of her parents which brought her at last to the insignificant but strategicallly  interesting Bayreuth court. Her descriptions of her reception there are full of disdain and mockery of the local nobility. Removed from the wider world, she succeeded in initiating a flourishing culture of music, literature, architecture and garden design, and in starting up a respectable circle of people interested in the arts. To this end she imported a host of artists into the royal capital. The peak of all this was the margravial Opera house, nowadays a UNESCO world heritage site. She frequently withdrew to her Eremitage, which had been her wedding gift: to read, write, compose and philosophise. She kept up a correspondence with the philosopher Voltaire, although she disapproved of his atheism.

She herself had been brought up as evangelist-reformed, and she and her lutheran husband maintained an enlightened devoutness. Both had suffered a very strict upbringing at the hands of their fathers, who were both dedicated to extreme piousness. The moment they came to power, they dismissed the pietistic court preacher Silchmüller. The confirmation of their daughter Sophie Friederike in the City church was the first in Bayreuth, the big public ceremony being preceded by a very strict examination in the Palace beforehand. The extent of the margravine’s influence on the building works in the churches remains open to question – she was very well-educated and also interested theologically. Inside the churches, a large initial ‘F’ is a reminder of her husband Friedrich. The costly programme of works and the whole cultural scene were financed by higher taxes and ‘forced lending’ even from church congregations, all of which diminished Wilhelmine’s popularity as she was considered to be too haughty.

Picture: Bust of Wilhelmine at Schlossberglein, with a view of the margravial Opera house.

Further information may be found in:  Wikipedia, Tourism and Culture in Bayreuth, and Bavarian Palace Management