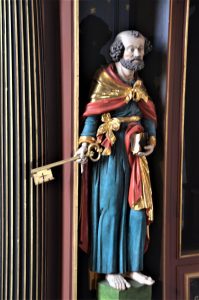 Peter and Paul are the two apostles who are foremost in spreading the Christian faith. In the Acts of the Apostles, they agree that Peter should work as a missionary amongst the Jews, and Paul amongst the “heathen” or non-Jews. In margrave churches they often stand to either side of the altar, und generally carry a book, as do the Evangelists – they too serve the Proclamation of the Word.

Peter holds the keys in his hand. Jesus says to him “I will give you the keys of the kingdom of Heaven” (Matthew 16, v.19).With this, Jesus gives to him and his church the power to forgive sins, thereby unlocking the door to Heaven actually here on earth (so not after death at the actual gates of Heaven, as in many jokes about Peter which pull the listener’s leg). The figure of Peter with book and keys stands for the words of the forgiveness of sins which are spoken during confession.

Sometimes the book which Peter carries bears ‘Peter’s Confession”: “You are the Christ, the Son of the living God” (Matthew 16, v.16). Peter testifies to Christ as the Saviour of the world. At the Transfiguration of Christ on Mt Tabor, Peter is one of the three disciples permitted to accompany Jesus who then are blinded by the unearthly light (eg Bindlach). One of the “objects” belonging to the Passion of Christ ((instruments of Christ’s Passion) is the cock, a reminder of how Peter betrayed his master three times. The cock on church towers warns Christians to witness to Christ with more courage than Peter, “the rock”.

Picture: Peter with key on the customary left side of the altar in the parish church of St. Jakob and St. Erhard in Rugendorf.

Who has the keys? You can find a reflection on Peter by  Rev. Hans Peetz here.