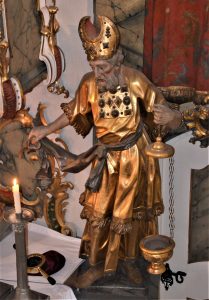 In the Old Testament, Moses’ brother is considered to be the founder of a race of high priests. They served in the temple of Jerusalem and were the only people permitted to enter the Holy of Holies: ie the area behind the curtain, where the Ark of the Covenant with the tablets of the Ten Commandments stood. Here, God was present. In many religions, high priests were considered to be bridge-builders between God and man (latin: pontifex maximus). They were in charge of the sacrifices which were offered in the temple. Aaron wears priestly vestments and a priest’s cap, a little reminiscent of the pope’s mitre, and carries a thurible.

In margrave churches, Aaron and Moses stand on either side of the altar (as in the picture in Benk, or in Wonsees). Both are regarded as forerunners of Jesus Christ and point forward to Him. In the New Testament, especially in the letter to the Hebrews, He is described as the High Priest of the New Covenant. He is the bridge-builder, the mediator between God and man. All human mediators have been discharged. Since He gave His life on the Cross, no other sacrifice is necessary.