Adam Rudolph Albini (there are many spelling variations of the name), was born on  6th July 1719 in Bamberg, and was the son of the stucco artist  Georg Conrad Albin, who italianised his surname into “Albini”, and probably came to Bamberg with the help of Johann Dientzenhofer of Fulda. A.R.Albini worked in Bayreuth from 1749 as a court stucco artist, and it was there that he died on 25th August 1797 and was buried ‘quietly’. To begin with he collaborated with others under the supervision of Jeronimo Francesco Andreioli, and worked on the Old Palace of the Eremitage and on the Collegiate Church in St. George; on St John’s church, Trebgast ; and on St Walburga’s church in Benk, where he created the undersides of the galleries.

Working independently he undertook the stuccowork in the hospital church in Bayreuth (1749/50), in the parish church of Nemmersdorf (1753), in St. Bartholomäus church, Bindlach (1768) and finally in St. Ägidius church, Eckersdorf (1793). In addition to the work he did in the margravial palaces of Bayreuth and Sanspareil, he also worked (together with Michael Krätzer) on the Ansbach Residence,  on public buildings such as the Redoutenhaus at the margravial Opera House (today a World Heritage Centre) and in the private houses of citizens.

In the Catholic community of Bayreuth he was, like his colleague Pedrozzi, a lay administrator of the church of the church and as such was responsible for the finances. By building the Oratory in Friedrichstraße he contradicted the assertion of the religious authorities in Bamberg that the Catholic minority in Bayreuth was being exposed to pressure. 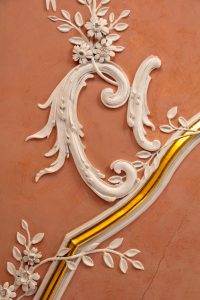