These winged heavenly creatures are found in many religions and cultures . They bridge the endless gulf between Heaven, the realm of the gods, and earth. They bring tidings to, and protect, mankind. They are godly creatures, most often in human form. Nike, Greek goddess of victory, is also portrayed with wings.They are often depicted  on ancient coffins as geniuses where they embody something of the character of their protegees. Nowadays , angels are to be found just as much in esotericism, art, consumer goods and kitsch as in churches and people’s own private devotions.

Various sorts of angels
For many people, guardian angels play a big part in their religious life. The verse from Psalm 91 ‘for He 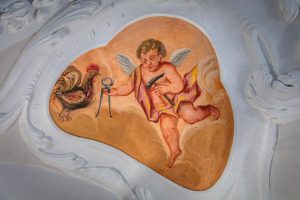 will command His angels concerning you  to guard you in all your ways’ counts amongst the best-loved baptismal quotations. And yet they appear as rarely in the margrave churches as in the Bible. The many child angels or ‘putti ‘ found everywhere in baroque art act as heralds. They are seen in  pictures, on pulpits and on altars holding up the instruments of Christ’s passion. Just like the figures of youths or young women , they are God’s messengers, bring news of Him to mankind. Sometimes this is done in silence, when they themselves embody the message as allegories. And sometimes their beautiful legs portray

As heavenly creatures they bring Heaven to the earth. They surround God in His majesty like a heave 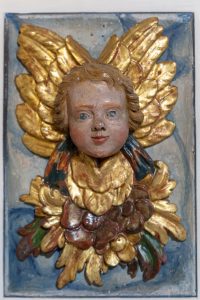 nly court  (halo of rays of light).  They praise Him with their Gloria and proclaim His holiness with the Sanctus. In the Old Testament, God is also referred to as the  ‘Lord of Hosts’ (Jahwe Zebaoth), because a host of angels – i.e. countless numbers – surround Him. The many angels in churches (probably most of them in Creußen) show that Heaven itself is present in the church services. The angel heads on the altars urge the congregation to join in with the ‘Holy, holy, holy’. Baptismal angels combine both elements: as messengers they bring the baptismal water, Heaven’s gift, and they embody God’s presence.

Pictures: Angel with the instruments of Christ’s passion on the ceiling of Trinity Church in

Neustadt am Kulm; angel head on the altar of Trogen parish church.