There are frequently angels on baroque fonts, and usually there are four ‘winged heads’ looking in all four directions of the compass. Baptism is, after all, a gift from Heaven, and this is especially well illustrated by the 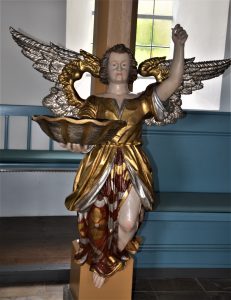 baptismal angels found particularly often in Upper Franconian margrave churches. An angel holds the baptismal bowl above its head (parish church of St John, Bayreuth; Wonsees) or holds it in front of itself (Gesees, Regnitzlosau, Selbitz, Trogen). In former times, in some places during the service a baptismal angel would be lowered on a rope from the church ceiling for the baptism itself. The angel brought the water for baptism in the bowl virtually direct from Heaven. Its often very large wings emphasise its heavenly provenance.

Picture: The baptismal angel in Marlesreuth has no stand, which is proof even today that it used to be lowered from the church ceiling.

Baptismal angels usually have a very friendly expression. They embody the friendliness of God, who during 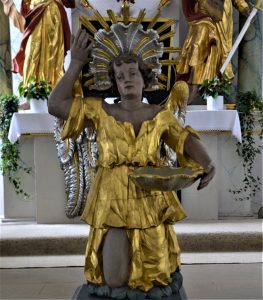 baptism says ‘yes’ to a human child. The shape of the baptismal bowl is symbolic: a shell is an ancient symbol for Christ and later became a symbol of pilgrimage. The pilgrimage to Paradise begins with baptism. A golden wreath around the bowl reminds us of the promised ‘crown of life’.

Picture: The baptismal angel in Trebgast also carries the lectern. The sacrament and the Word of God belong together.