Castle churches or chapels were the earliest new evangelical churches to be built. In the 16C many princes had new castles or palaces built which enabled a degree of comfort unknown in the medieval castles, which were difficult to get to and yet because of the developments in new weapons no longer offered much protection. And naturally  there had to be a church or chapel for the court.

The chapel of Hartenfels Castle in Torgau (Schlosskapelle Torgau), built in 1544, is regarded as the first evangelical church in the world, and was consecrated by Martin Luther himself. (The castle church in Neuburg a.d.Donau, consecrated in 1543, was intended for a catholic noble family and only later did it become evangelical.) Castle Callenberg in Coburg contains the oldest pulpit altar in Upper Franconia, dating from 1618. Whereas those already mentioned are built in the style of the Renaissance, the castle church (1646) of Friedenstein Castle in Gotha, together with its pulpit altar, is already baroque in style. Above the entrance gateway to the most spacious grounds in Germany in the 17C the ‘Kiss of Peace’ bears witness to the desire for peace.

The margraves of Brandenburg-Kulmback had their castle church at Plassenburg Castle. After Margrave Christian moved the capital to B 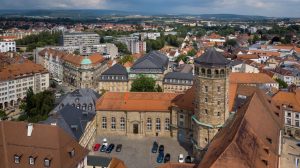 ayreuth, a chapel was set up in the ‘Old Palace’ which was later enlarged by Margrave Christian Ernst. After the palace fire of 1753, the present Palace Church was built, and contains the burial place of Margrave Friedrich and Margravine Wilhelmine.

The churches or chapels provided religious services for the court, and the court preacher was responsible for these. However, in Friedrich’s time the court church for official or prestigious functions remained the City Church with its margravial box and vault. Other aristocratic families occasionally had their own chapels in their palaces and castles. An outstanding example in our region is the Klausstein chapel. As patrons of the church, the local aristocratic family saw to it during their tenure that the whole community had a church built especially for them. Old churches are mostly found on former seats of the nobility.