The promise in the Revelation of St John ‘Be faithful , eve 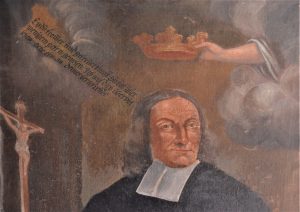 n to the point of death, and I will give you the crown of life’ (Rev Ch 2, v 10) plays a particularly important part in the baroque period. On gravestones and epitaphs, angels or a heavenly hand are to be seen offering a crown. Heavenly reward awaits the deceased as long as they have remained true to their faith during their time on earth. Allegorical figures promise to the living the heavenly symbols of victory: crown, laurel wreath and palm branch (Graveyard church in Münchberg, Weidenberg). In Weidenberg, on the opposite side, a female figure stands with a chalice and a cross and challenges us, like Jesus to drink the bitter cup of sorrow and take up His cross ourselves.

Picture: On the tombstone of a priest in Mistelbach a heavanly hand plaecs the crown of life on the ‘faithful servant’s’ head. 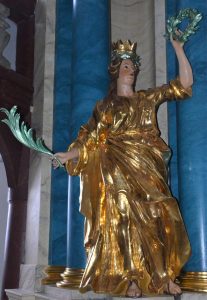 The allegory of the crown/laurel wreath reminds us of the Greek goddess Nike as she is portrayed on many victory pillars (eg Berlin). Upon his return from battle, a victorous general in ancient times would be rewarded with a laurel wreath. In the early Christian period, the wreath turned into the symbol of the martyrs who paid with their lives for remaining loyal to their faith. In margrave churches, the symbols are used to console the believers. The victory prize is promised to all, for by His Resurrection, Jesus Christ has conquered the powers of evil, and He promises heavenly glory, even though the way takes us now through much suffering.

Picture: The female figure on the left of the altar in St Michael’s church, Weidenberg carries the victory symbols: crown, laurel wreath and palm branch.