The four Evangelists are seen in practically every church, usually carrying a book and a writing quill in their hands. They are accompanied by their evangelical symbols: 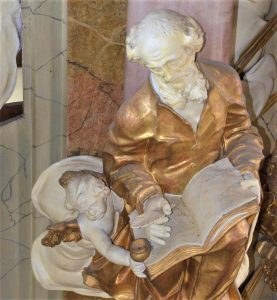 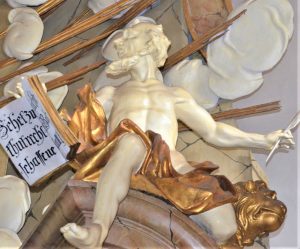 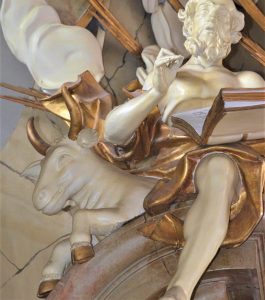 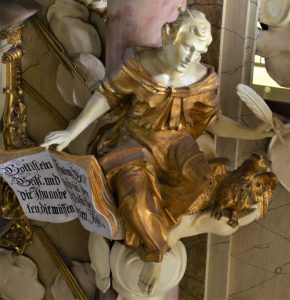 In medieval portrayals they all have wings, even the lion and the ox. They are heavenly messengers and bring the Good News (the Gospel) to mankind. Matthew’s symbol was originally a man. He was permitted to keep his wings and became an angel, who holds the Evangelist’s inkwell for him or whispers the words into his ear. In the centuries following the Reformation the Evangelists are usually depicted without halos. They are messengers and the message they proclaim is that of Jesus Christ, the salvation of the world. They often stand to either side of Him on the main body of the pulpit, and sometimes there are key verses from their Gospel on the books they carry. Later on the word ‘evangelist’ came to be applied to anybody who preaches with missionary zeal.

If the Evangelists stand at all four corners of the altar, as in the pictures from the parish church of St John, Bayreuth, the significance of the number (number symbolism) comes into play. Four is the number of the earth in its spatial expanse (the four points of the compass) as well as its temporal extension (the four seasons).The Gospel is to be proclaimed to the four corners of the earth. Christ promises to be with us to the end of time. (Matthew 28)