In margrave churches the font stands in the centre of the church, usually near to the altar. This expresses the evangelical understanding of baptism: the two sacraments , baptism and communion, belong together. In them, God gives Himself to us. Baptism takes place in front of the congregation. The font is before everyone’s eyes throughout the service and reminds them of their own baptism, in which God accepted man for ever. For Martin Luther this was his consolation whenever he despaired of himself : ‘I am baptised.’ In other churches the font is found somewhere near the entrance or in its own baptismal chapel in front of the church, and then baptism appears like an entrance ticket into God’s world. 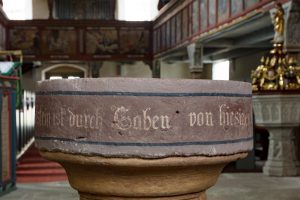 Older fonts are often round. The circle symbolises perfection, and so is also a symbol of Heaven. Octagonal forms are even more frequently seen. The number eight has various meanings (number symbolism): the Creation took seven days and the eighth day belongs to the ‘New Creation’. It is the day of Jesus’s circumcision and of His resurrection – a heavenly number. This is emphasised by the angels usually found on four sides. Flowers and fruit indicate Paradise and at the same time remind us to bring the good fruits of faith into our lives. Words from the Bible clarify the meaning of baptism. Jesus’ invitation  “Let the little children come to me” is even more significant when the high child mortality rate at the time is considered.(Picture: In Rugendorf parish church the neogothic font with its baroque cover may be seen near to the old round font.)

Many fonts have a cover which is  often quite elaborate.  Usually either the baptism of Jesus is portrayed on it (particularly splendid in the case of the Church of the Order, Bayreuth (picture) which also features in many paintings), or John the Baptist with the lamb and the motto ‘Behold the Lamb of God’. 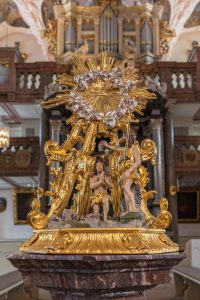 An unusual form is represented by the baptismal angel.