Halo of rays of light 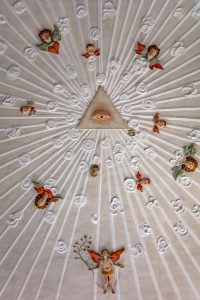 e godly halo of rays of light spreads out like beams from the sun.It surrounds the triangle, the three Persons of the Trinity: Father, Son and Holy Spirit – either together or individually. It shines around the Risen One or around the dove as the symbol of the Holy Spirit. The Ark of the Covenant of the Old Testament also gleams in its light, because it embodies the presence of God. ‘Light is your garment’ says the Bible about God, and ‘His glory rises over you’ – like the sun.

The sun and its rays are in many religions an image for God, or it is worshipped as a god. For without it there is no life on earth. At the same time, it shines so brightly that it dazzles the eye – an allegory of the holiness of God. Margravine Wilhelmine had the sun god Apollo with his four-in-hand chariot (quadriga) erected on the roof of her ‘sun temple’ in the Eremitage in honour of her brother Friedrich, King of Prussia. The ‘Sun King’ Louis 14 was the great example of an absolute monarch. In the churches of this period the halo of rays of light is befitting only for the triune God. It becomes an expression of His heavenly glory. As it says in the hymn  “The sun which smiles on me is my Lord Jesus Christ…”. Humans are very rarely portrayed with a halo in margrave churches.