Archangel Michael is found in Judaism, Christianity and Islam. In the book of the prophet Daniel he appears as the guardian angel of the peo

ple of Israel. In the Revelation of St John, Ch 12, he conquers the devil who takes the form of a dragon. This is the representation seen in churches, but also on the Castel Sant’Angelo in Rome, Mont St.Michel Abbey in France and on Schwerin Castle . After the battle of Lechfeld in 955 he was made patron saint of the Holy Roman Empire and later of Germany. Many churches were dedicated to him, and people began to speak of  ‘German Michael’.  But he was also very popular in France, after he was said to have challenged Joan of Arc to fight for France’s liberation in 1425. In the Middle Ages, Michael took on the role of the ‘weigher of souls’, who weighs the souls of the departed and thereby judges them. On the town coat-of-arms of Ludwigsstadt (picture from the city church of St Michael) the devil is trying unsuccessfully to pull down the opposite dish of the weighing scales.

In margrave churches, Archangel Michael is portrayed as the vanquisher of the devil up on the roof of the pulpit (Berg, picture) or on the altar (Thalm 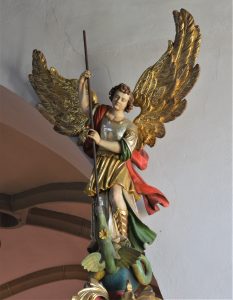 ässing),  where normally the Risen Christ would stand. In this way he refers to Jesus Christ, who by His Resurrection conquered death and the powers of evil. With his own name, Michael acknowledges the glory of God, for the Hebrew word means ‘who is like God?’ In Rugendorf church, above the picture of Michael up in the altar God’s name ‘Jahwe’ is shown.

Michael: Symbol of the Risen One. You can find a sermon by Father Hans Peetz on Archangel Michael here