He is mostly shown with the two tablets of stone (Ten Commandments). According to the story in the 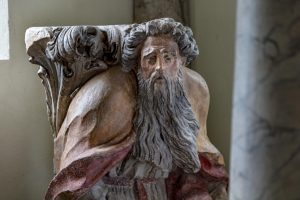 second book of Moses, God himself handed these to Moses when he made a covenant with the people of Israel on Mt Sinai. Thus the tablets of the Ten Commandments have become a sign of this covenant: God chooses Israel to be His people. In the Christian churches, Moses plays the role of a forerunner: the  ‘Old Covenant’ points to the ‘New Covenant’, which God has made through Jesus Christ.  Moses is often shown with two little horns on his head. This can traced to an error in translation: it is said that his face shone when he had encountered God and came down from the mountain. In the Latin translation the word used for ‘shining’ was ‘cornuta’ which also means ‘horned’ and the little horns came from this.(picture: Moses by Elias Räntz, former pulpit base in Holy Trinity Church, Bad Berneck) 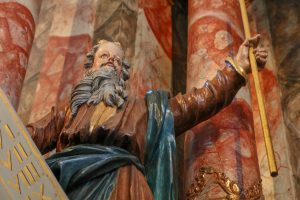 During the Transfiguration of Christ on Mt Tabor, Moses and Elijah appear. God’s voice is heard from Heaven commanding the disciples to listen to Jesus Christ. Now the law of Moses is no longer valid, but the Gospel.(Law and Gospel). The Ten Commandments retain their importance as fundamental values of human coexistence and as  ‘confessional mirrors’.                                                        Sometimes Moses carries his staff, with which in the desert he could strike fresh bubbling water from the rock. When he points to the pulpit with his staff – as for instance in the picture from Wonsee – it means: here is the source of living water, whenever God’s word is preached.