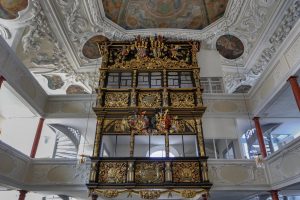 when attending services in the churches under their patronage. This was variously known as the ‘patronage box’,  the ‘lord’s seat’,’the seating for the gentry’ or the ‘seating for the nobility’. It was separated from the rest of the congregation by walls and glass windows or wooden screens. Glass windows were also needed if the stall had its own heating system. The exceptional artistic furnishing was in keeping with the rank and means of the noble family in question – and with their sense of self-importance. The ladies and gentlemen of Thurnau had the most ornate patron’s box in the whole of Upper Franconia built into the church of St Laurentius (picture) , with woodcarvings by Elias Räntz, who also decorated the stove so skilfully. And in Neudrossenfeld, the private box of the Ellrodt family has valuable painted leather wallcoverings.

The Imperial Counts von Giech at Thurnau were able to access the church in comfort via a private covered path from their castle. Elsewhere, too, the aristocracy had their own entrances and staircases so they would not have to encounter the common people when attending church. Margrave Christian had the ‘lion entrance’ and an extension with a wide flight of steps built specially on to the City church in Bayreuth. If the curtains were closed, the congregation had no idea whether the prince was actually there or not. Nevertheless , the master was always present, above all in the form of his emblems (coats-of-arms, initials), e.g. on the wall-hanging in the margravial box in the Church of the Order in Bayreuth. Generally speaking, these boxes were positioned directly opposite the pulpit…and a little higher.