The word means ‘rebirth’.The main aim of this cultural period, at its height in the 15C and 16C, was to recreate the civilisations of Greek and Roman antiquity. It began in Northern Italy, where a free spirit reigned in city-states such as Venice, where the horizon was being broadened by trade relations.  Ancient works of art were rediscovered and philosophical writings such as those of Plato were found once again. A spiritual awakening led to many inventions and discoveries, and, on the threshhold of the modern period, man himself walked into the centre of the picture. His anatomy was studied in meticulous detail and was portrayed artistically, as was nature itself in its ideal form – as for example by the most famous Renaissance artist in Germany: Albrecht Dürer. In the philosophical world, the humanists were concerned with ‘humanity’ and precision. Ancient texts were read in the original languages and many misrepresentations were corrected.This was a fundamental prerequisite for the Reformation.

The architectural and artistic style of the Renaissance may also be found in several castles and churches in Upper Franconia. Plassenburg Castle in Kulmbach is considered one of the greatest and most impress 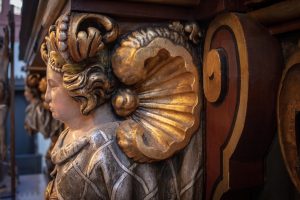 ive Renaiassance buildings, and Duke Johann Casimir’s alabaster monument in the St Moritz church in Coburg is thought to be one of the most beautiful Renaissance memorial stones in Germany. The first pulpit altar in the region was built in 1618 in the chapel of Callenburg Castle in Coburg. When the City church in Bayreuth was rebuilt following the fire of 1605, the staircase to the margravial box was given a Renaissance entrance, and in 1615 a Renaissance altar with typical classical architectural elements was built.  Probably the most famous Renaissance artist of all was Leonardo da Vinci, and his ‘Last Supper’ was the model for countless copies, not only in living rooms and bedrooms (like Dürer’s ‘Praying Hands’), but also on many altars.

(On the Renaissance in general: extensively covered in Wikipedia: https://de.wikipedia.org/wiki/Renaissance)