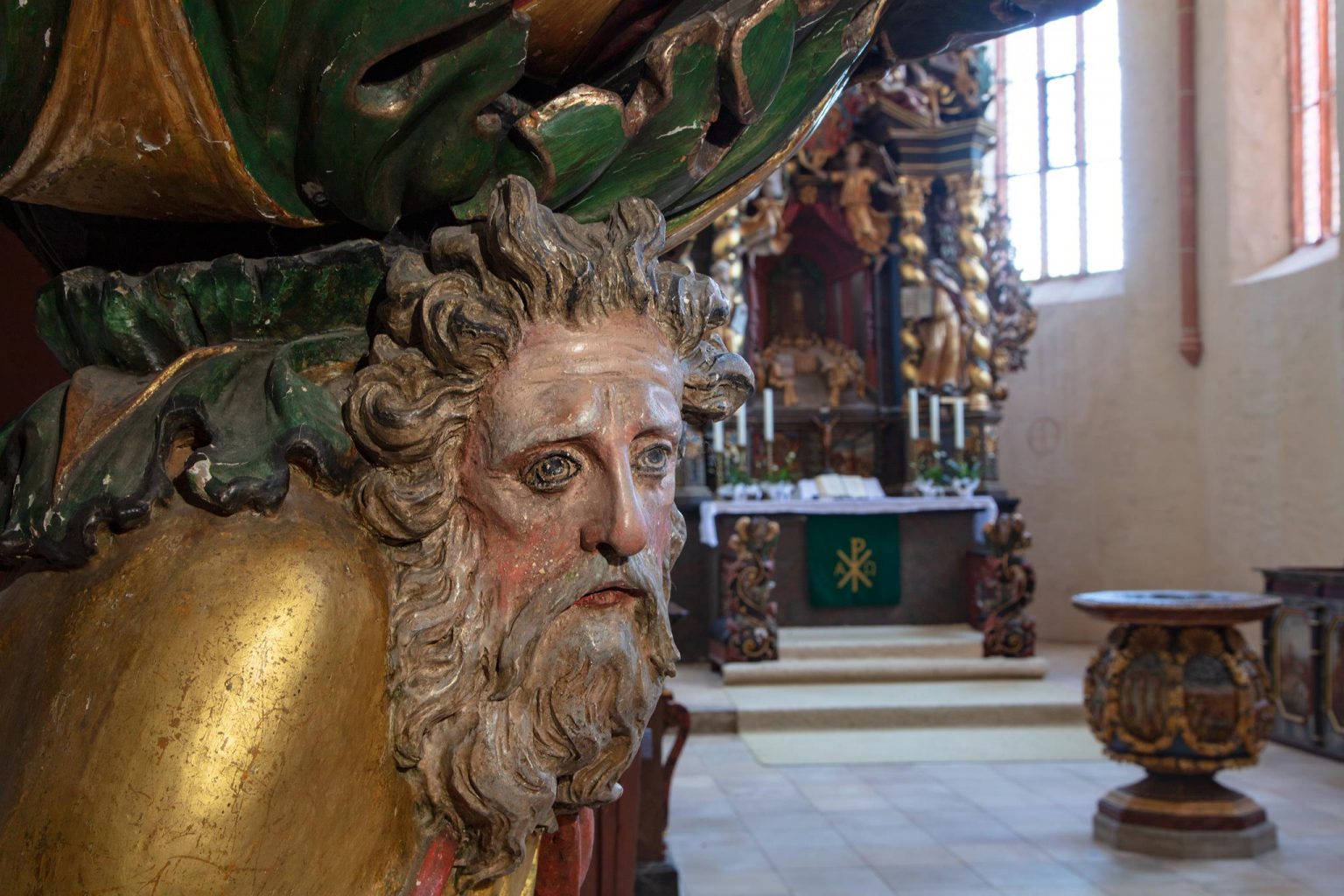 Round about 1647 the farmers of Pilgramsreuth began to grow potatoes on their land, and as far as we know they were the first in Germany to do so, thus providing a revolutionary contribution to combat the regular famines. But there are other reasons for the village church’s being so stately and beautifully furnshed within. Both before and long after the Reformation, there was a flourishing Marian pilgrim route here which attracted many pilgrims. The Gothic statue of Mary with the baby Jesus, now on the north wall of the choir, and some of the wallpaintings which have been uncovered are evidence of this. The chapel was first mentioned in 1308 and then was greatly enlarged in the 15C. Three layers of wallpaintings lie one on top of another, the latest one being the large picture of St Christopher, made around 1520.
Nowadays the Gothic building houses rich baroque decoration. The galleries were added in 1687/8, then the ‘women’s chairs’ on the ground floor, and behind them, slightly raised, the men’s seats which run around them. It was skilled local craftsmen who built them, as well as the beautifully decorated ‘priest’s chair’. The Bayreuth artist Johann Heinrich Schertel designed the colour scheme and, together with his colleague Heinrich Matthias Lohe from Hof, created in total 100 paintings of biblical scenes on the seating. The small ‘aristocrats’ gallery’ was bought by the whole parish of Fohrenreuth who use it to this day as their regular seats.
The pulpit (1684) and the altar (1710) are both masterpieces by the court sculptor Elias Räntz. The body of the pulpit, with Christ the Saviour and the apostles, is carried by Moses with the tablets of the Ten Commandments, and the whole composition is very expressive. Angels and the Evangelists stand on the pulpit roof, with Archangel Michael above them. The altar portrays two Christmas scenes at the bottom, with above them a three-dimensional picture of the Last Supper. The holy events are completed with the Crucifixion, Resurrection and Ascension of Christ, glorified by the angels and to which St Peter and St Paul bear witness.
The font, in the form of a globe, and the processional cross are further important examples of the baroque furnishing of the church.