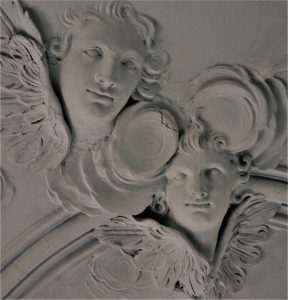 Jeronimo Francesco Andreioli (also spelt Andreoli, with many other variants) was born in 1700 in Muzzano near Lugano, died in 1757 in Dresden, and workedfrom 1739 – 1745 as a court stucco artist in Bayreuth.  After training in Nuremberg with his uncle Donato Polli, the catholic ‘Italian’ worked on the Benedictine abbey in Ottobeuren, the Residence of the prince-bishops in Eichstatt, Hiltpoltstein parish church and varous other catholic churches. In the evangelical margravate he decorated the churches –  in particular the celings – in Aufsess, Benk and Trebgast and the Collegiate church in Bayreuth. His work can also be admired in the Old Palace of the Eremitage. As well as  the stuccowork in rococo style, the individual angels’ faces are particularly impressive, despite the use of plaster moulds that he presumably brought with him from other places where he had worked.

As one of the leaders of the catholic community in Bayreuth, he used his influence with Margrave Friedrich to help them to get  their own place of worship in the Friedrichstrasse. Up until his sudden departure to Dresden (to collaborate on the catholic court church), to where his family subsequently followed him, he led the life of a ‘guest worker’. The church registers of his homeland record the baptisms of his children and godchildren in the winter months, and when his first child was baptised , one of the godparents was Giovanni Battista Pedrozzi, who later became a court stucco artist in Bayreuth.

Picture: Andreioli’s stucco ceiling in St John’s church in Trebgast is unusual in that it remained unpainted.