In the mid-12th century Gothic art and architecture began to spread from the region around Paris (“Île de France“) and reached Germany in the 13th century. This style dominated the whole of Europe until around 1500. Even later churches, particularly in the Protestant area – for instance the City church in Bayreuth – were rebuilt in the ‘post-Gothic’ style. The word ‘gothic’ comes from the Italian and originally meant ‘strange, barbaric’ – in contrast to the ‘golden age’ of antiquity. During the Renaissance, that which was formerly known as ‘French style’ was relabelled ‘in the German manner’ and referred to erroneously by Goethe as ‘German style’ – which itself also contributed to a rebirth in the neo-Gothic.

Gothic churches – unlike the heavy Norman churches – soar upwards, towards Heaven. The walls are opened up with big windows which let the sunshine in, and this becomes an allegory for the ‘morning light of eternity’. Heavenly Jerusalem, in all its beauty, is supposed to be seen here on earth as the promise of a new creation. Stained glass windows portray this beauty with their colours, just as do the rich decorations and tracery. Paintings and statues herald our redemption through Christ. Great crucifixes, especially in late Gothic art, portray the ‘Man of Sorrows’, who brings comfort to the afflicted.The tall, light feeling of spaciousness is made possible with new building techniques such as fan and rib vaulting, the typical lancet windows and flying buttresses on the exterior. 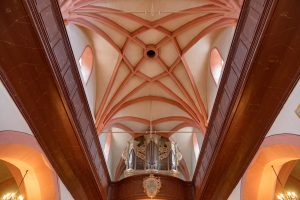 e towns, basilicas with several aisles were built, with the chancel at the east end and twin towers at the west end. In the country, the predominant style was the more economical form of the tower church with a chancel: the tower basement of the tower was used as the chancel and also offered a place of sanctuary in times of danger.The congregation joined in the service, standing in the nave behind the chancel arch. Many of the churches today retain this form and have Gothic building features, wall paintings or figures. Most of the paintings of saints were painted over in the Baroque period and they were not uncovered again until modern times (Bayreuth: St. John , Eckersdorf, Presseck). Figures of saints were relegated to the attic, or were incorporated respectfully into the new altar. (Neudrossenfeld, Töpen). Bindlach’s congregation sold their late Gothic Grünewald altar to Lindenhardt. Certain churches, such as the pilgrim church of St Mary at Gesees, retain all their Gothic building features, but the interiors were completely refurbished in  ‘margrave style’.

(Detailed information on the Gothic style can be found in Wikipedia https://de.wikipedia.org/wiki/Gotik)