Born on 16th November 1678 in Bayreuth as the only son of Margrave Christian Ernst and his second wife Sophie Louise of Württemberg, Geo 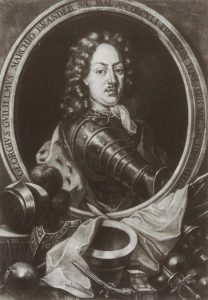 rg Wilhelm’s  Grand Tour took him to England and Holland. It is possible that the inspiration for the Church of the Order came from Amsterdam, where he saw the Norderkerk, built 1620-1623 with a ground plan in the shape of a Greek cross. His love of the navy definitely came from his study trip to the North Sea. After his return, and whilst still heir to the throne, he had the model town St George by the Lake built (you can see a model of it in the ‘Wilhelmineaue’ park  near the Albrecht Dürer St entrance).

Laid out in the baroque style it consists of the Church of the Order (called the Sophienkirche in honour of his mother), the Castle of the Order for the members of the Red Eagle Order which he founded, a theatre, for which G. Ph. Telemann wrote an opera especially, and an artificial lake. Georg Wilhelm would have sea battles enacted on this lake, and for these the young prince would command up to 2000 soldiers and citizens to repeatedly conquer the Turkish fleet,  causing the death of several people in the process. For his other passion, hunting, he had the hunting lodges of Kasierhammer, Falkenhaube and Thiergarten, the Eremitage and Neustädtlein Castle built.

Georg Wilhelm had to wait until 1712 and the death of his father before he could ascend to the throne. His impatient wait may be indicated in the allegorical paintings on the ceiling of his prince’s box: ‘I reach for higher things’. He had little luck in his private life: his wife Sophia of Sachsen-Weißenfels – barely 15 years old when he married her – did not return his love, and instead gave rise to jealousy, for which he had her banned to Plassenburg Castle. The same fate befell his only daughter, who entered a relationship which did not befit her station and bore illegitimate twins. When Georg Friedrich died in Bayreuth on 18th December 1726 the younger Franconian line of margraves , founded by great-grandfather Christian in 1603, died out with him.