Neo-Gothic churches are confusingly similar to the medieval ones on which they are modelled. However, the Gothic style was frequently copied rather too perfectly and consequently appears artificial and overloaded; the shapes come across as harsh and the historical elements are missing. And it was not just in church construction that people went back to the old forms. In England, palaces such as the Palace of Westminster were already being built round about 1720 in the ‘Gothic Revival’ style. In 1755, King Friedrich the Great had the first neo-Gothic building in Germany built, modelled on the British example – the Nauener Gate in Potsdam. Presumably he wanted it to remind people of the power of the Empire in the Middle Ages , and hence the neo-Gothic style took on a nationalistic slant. Goethe’s paper ‘On German Architecture’ in 1773 was also a major contributory factor to this.

The prince among poets erroneously attributed the construction of Strasbourg Cathedral just to one brilliant German master builder, and the French origin of the Gothic style was contested as part of the budding nationalism. Poets and painters like Caspar David Friedrich awakened enthusiasm for medieval buildings too. And so not just churches, but town halls (Munich), post offices, schools and railway stations were built in neo-Gothic style. Great churches which had remained unfinished for centuries such as Cologne Cathedral were now completed. Traces of the romantic longing for what, looking back, appeared to be a transfigured past can also be seen in the operas of Richard Wagner. This phase lasted until about 1900. 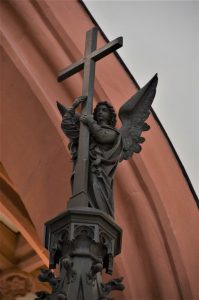 s dating from earlier periods of style were frequently ‘purified’ , ie ‘cleansed’ of any non-Gothic furnishings. Painted ceilings were overpainted, and above all  baroque altars, pulpits , choir stalls and tombstones were destroyed and baptismal angels cleared away. Under the influence of the ‘new Lutherism’, pulpit altars were dismantled. Instead,  churches were to have stained glass windows like those in the Gothic cathedrals, although the style of these turned out to be Romantic. The prime example of neo-Gothic ‘purification’ in this region is the City church in Bayreuth, where all the furnishings of a margravial court church (with coats-of-arms, margravial flags etc) were destroyed, with  the exception of the Renaissance altar, which because of lack of money they were unable to replace with the ‘carpenter’s Gothic’ one they had already chosen for it.  Nowadays neo-Gothic style is being accorded new respect in the preservation of monuments.

(Picture: Angel with cross on the neo-Gothic pulpit of the City church in Bayreuth, 1848)